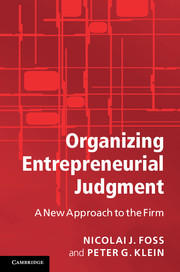 6 - Entrepreneurship and the economic theory of the firm

In Knight’s (1921) view, firm organization, profit and loss, and entrepreneurship are inextricably linked. These phenomena arise as an embodiment, a result, and a cause, respectively, of commercial experimentation – a view founded on a particular ontology of the world as essentially open-ended and not deterministic (1921: chapter 7). Few economists have followed Knight in linking the firm, profit and loss, and entrepreneurship, especially from his philosophical starting points. And yet, as we noted in the beginning of this book, there are many good reasons to treat the theory of entrepreneurship and the theory of the firm together. Such a synthesis informs many foundational questions in economics, business strategy, and public policy: Can we meaningfully address entrepreneurship without considering the organization in which such entrepreneurship takes place? How does the structure of the firm influence entrepreneurial actions? How does firm organization (e.g., the allocation of residual income and control rights) affect the quantity and quality of entrepreneurial ideas? And so on. To answer these, we need to bring the theory of the firm and entrepreneurship literatures into close contact. And yet, the important connections between these two bodies of literature have been largely overlooked. We seek to identify and establish some of those connections in this and the next two chapters.

In bringing together entrepreneurship and the theory of the firm we hope to convince scholars in both fields that there are significant gains from trade. We start by reviewing extant theory of the firm, asking why these gains were not recognized, evaluated, and exploited. Economics, and hence the economic theory of the firm, developed throughout the twentieth century in a particular way, one that effectively excluded the entrepreneur from the organization and the market – not because the insights of Schumpeter, Knight, Mises, and other thinkers on entrepreneurship are unimportant or not subject to clear, precise, systematic presentation and development, but because the increasingly formal and stylized treatment of economic phenomena made it difficult to incorporate judgment and creativity, bounded rationality, unforeseen contingencies, and so on.