from Section 4 - Problems Associated with Infection

from Section 4 - Problems Associated with Infection

from Section 8: - Translation to obstetrics 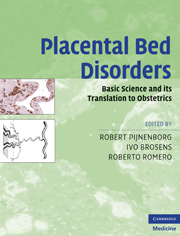