from Section 1 - Culture media and solutions 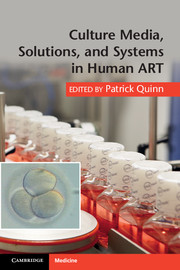 from Section 1 - Culture media and solutions

from Section 3 - Summary and conclusions