from Part III - The practice of rhetoric

from PART I: - TEXT IN CONTEXT 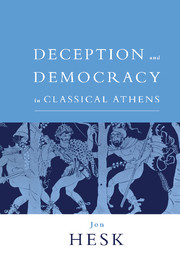