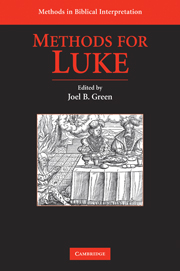 from Part II - The gospels as witnesses to Christ: content and interpretation

from Part I - The Jesus of history