Home
The Cambridge Dictionary of Christianity

The Cambridge Dictionary of Christianity 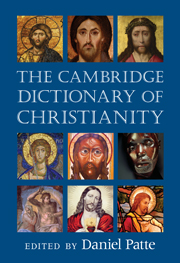 ‘The Cambridge Dictionary of Christianity is the most up-to-date treasure-trove addressing the question, What is Christianity? Eight hundred and twenty-eight contributors from around the globe set out to appraise the historical, contemporary, and ecumenical dimensions of the multi-faced Christianity in 134 countries. With its concise articles, the Dictionary serves as a launching pad for an academic study of Christianity at the beginning of the twenty-first century. A unique value of the Dictionary is its restraint from confessional, ethnic, and religious sensitivities. As an indispensable tool for study, it leads us to both admire the old dimensions of Christianity and discover the latest features of its diversity.’

‘The Cambridge Dictionary of Christianity is an achievement of exceptional value, one that can substantially enrich basic instruction and advanced scholarly research on the formation and development of Christian beliefs and practices in socially and culturally diverse global settings. It provides succinct and accessible accounts of basic Christian doctrines, pivotal biblical texts, central liturgical practices, and patterns of ecclesiastical organization that are constitutive for major Christian traditions, embracing Orthodox, Roman Catholic, Anglican, ecumenical Protestant, and charismatic and evangelical Protestant movements. These traditions are examined, moreover, not simply in European or North American contexts, but with careful attention to their concrete manifestations in African, Asian, and Latin American settings.’

‘This volume is the most impressive and comprehensive dictionary on Christianity available to us. Taking a global perspective, the editor brings together the best minds from diverse regions of the world and various disciplinary backgrounds to produce a global account of the Christian heritage and tradition in its historical, cultural, and social contexts. These fascinating and accessible essays taken together probe deeply into the essence, meaning, and functions of the Christian faith in the twenty-one centuries of its existence. This is a significant work for theologians, scholars of religion, church historians, and all those who are interested in the issues of cultural identity, globalization, and interreligious encounters.’

‘This is the reference book I have been waiting for. It is broad in vision and comprehensive in scope, as its contributors represent a variety of Christian perspectives and beliefs. This historical survey from the origins of Christianity to the present provides us with a thick description of the nature of a rich ecumenical religion that is shaped by deep traditions and is ever-changing in the cultures in which it finds its various homes.’

‘A wide-ranging and up-to-date view of the state of Christianity worldwide.’

'This dictionary has been eight years in preparation and the end result is a sizeable achievement both in the clarity of the contributions and in their arrangement.'

‘… adds much detail, texture, and thoughtful analysis … all students of the topic should welcome it and want to read it.’