from Part I - Extreme environments: responses and adaptation to change

from Part III - Life in extreme environments and the responses to change: the example of polar environments 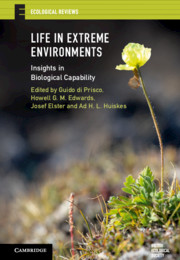