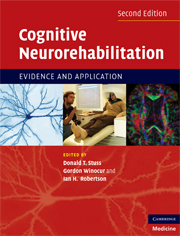 from Section 1 - Principles of cognitive neurorehabilitation