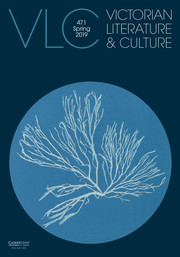 Roundtable: Telling It Like It Wasn't, by Catherine Gallagher