Maritime Vision and Power in the Qing Empire 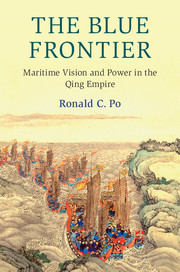 In this revisionist history of the eighteenth-century Qing Empire from a maritime perspective, Ronald C. Po argues that it is reductive to view China over this period exclusively as a continental power with little interest in the sea. With a coastline of almost 14,500 kilometers, the Qing was not a landlocked state. Although it came to be known as an inward-looking empire, Po suggests that the Qing was integrated into the maritime world through its naval development and customs institutionalization. In contrast to our orthodox perception, the Manchu court, in fact, deliberately engaged with the ocean politically, militarily, and even conceptually. The Blue Frontier offers a much broader picture of the Qing as an Asian giant responding flexibly to challenges and extensive interaction on all frontiers - both land and sea - in the long eighteenth century.

'This engaging study, rejecting common assumptions of China’s inwardness and isolation, stresses the significant attention that the Qing paid to sea power. The author provides a refreshing new look at China’s coastal military strategy. Recommended for anyone interested in the roots of China’s engagement with the world today.'

'The Blue Frontier opens our eyes to the Qing's management of its maritime frontier, a management that was crucial to China’s economic success during the High Qing. Showing that it had a deep and sustained engagement with the sea, the book makes clear that it was never just a continental power. Now that China is recovering its maritime role, this book is timely and important.'

'The temptation to read back from a major triumph or disaster and rewrite history to account for that outcome is irresistible. The rapid decline of late Qing Chinese power has produced some spectacular rewrites. Ronald C. Po takes on the myth of China’s neglect of maritime affairs and explores the careful thinking behind Qing policies. Through meticulous scholarship and unrelenting questioning, he discovers how simplistic it was to attribute China’s fall to its inattention to threats from the sea. His close examination of contemporary records provides us with a major corrective to the received wisdom laid down by our teleological urges.'

'The author is successful in shedding light on the maritime policies of the Qing navy and the theories behind it.'

‘This is an impressive book that should be widely read both by Qing historians and scholars interested in maritime history and naval strategy. Po makes a convincing case that Qing government maritime policy deserves greater attention and respect. He supports his arguments with an abundance of primary sources and draws broadly upon scholarly work in Chinese, English, Japanese, and German. His introduction skilfully connects his work on China to scholarship on maritime history in other parts of the world.'

‘This book is solid scholarship that corrects misconceptions about the Qing’s approach to maritime matters. In the process, Po has reconstructed a history of maritime consciousness and practice during the long eighteenth century that is insightful, clearly written, and carefully researched. Geared towards a scholarly audience (who will likely be grateful for the footnotes and appendixes), historians of China and other scholars with an interest in global and Asian maritime history will particularly value this book’s findings. Those seeking to better understand China’s current claims to the South China Sea and the Belt and Road Initiative may also find useful historical antecedents in this work.'