Essays On Law and Justice 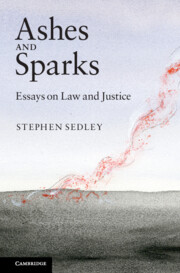 As a practising barrister, the Rt. Hon. Lord Justice Sedley wrote widely on legal and non-legal matters, and continued to do so after becoming a judge in 1992. This anthology contains classic articles, previously unpublished essays and lecture transcripts. To each, he has added reflections on what has transpired since or an explanation of the British legal and political context that originally prompted it. Covering the history, engineering and architecture of the justice system, their common theme relates to the author's experiences as a barrister and judge, most notably in relation to the constitutional changes which have emerged in the last twenty years in the United Kingdom.

‘This excellent book gathers lectures and articles which Stephen Sedley has composed over about thirty years, as advocate, trial judge and lord justice. Readers will be impressed, as I have been, by his learning and by the great sagacity of his judgments on many of the prime legal issues of our time.’

‘This is a great book, with powerful insights in law and justice offered in a hugely enjoyable collection of witty essays. The book is of obvious interest to legal theorists and practitioners, but it is also astonishingly successful in bringing significant legal issues, even quite complicated ones, within easy reach of general public discussion.’

‘Stephen Sedley writes with such calm cadence and laid-back humour that it is only at the end of each chapter that you realise how persuasively radical his reflections are. Whichever way you look at it - judging this book by its cover, or covering this book by a judge - you are offered delight and enlightenment from beginning to end.’

‘Ashes and Sparks grapples with some of the fundamental justice issues facing modern nations. Justice Sedley’s thoughtful - and sometimes provocative - comments on the evolution of the justice system in the United Kingdom, the role of Parliament and the courts, and the constitutional role of law in the search for social and individual justice, inform us and challenge us to think more deeply on these matters, so vital to our society.’

'The best book I've read so far this year … You could have no interest in the law and read [this] book for pure intellectual delight, for the exquisite, finely balanced prose, the prickly humor, the knack of artful quotation and an astonishing historical grasp. A novelist could be jealous.'

‘Brilliant, compassionate, engaged with society. These essays are a reflection of a remarkable mind. Astonishing that the originality and open-mindedness were not stamped out by the years of judicial toil. In and out of court, always a good read.’

‘A marvellous collection of essays, steering through profound questions of society, law and justice, which engages the reader in a lively and learned discussion of many themes. Stephen Sedley writes of judging and justice with the deep knowledge that comes from long experience of the law and rich experience of life. Many more sparks than ashes …’

‘In this remarkable and capacious volume, Stephen Sedley sifts the law with wit, wisdom and lucidity. As he brings his incisive intelligence and deep historical knowledge to the tensions between human rights and common law, to our competing rights and responsibilities, to the dysfunctions of the democratic system and the workings of justice, the very meaning of judiciousness takes on a new force. This is a book that anyone interested in our polity will savour.’

‘What unites all these pieces is the sheer quality of writing.’

‘Instructive and entertaining in equal measure.’

'… an educational and enlightening read … the thrust of this collection of essays is the studied observations of an exceptional mind, not only about the legal systems in the UK and elsewhere, but perhaps more importantly about the human condition. I will read it again.'