Latest issue of Journal of the Royal Musical Association 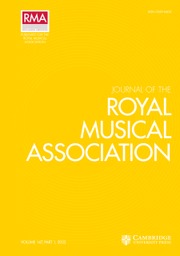