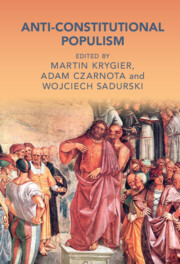 Around the world, populist parties have sprung up in formerly and formally liberal-democratic polities, challenging their existing political parties and leaders, and frequently overwhelming them. These challenges and successes were rarely predicted, arriving so soon after the wave of liberal democratic and constitutional enthusiasms, proclamations and institution-building which peaked in the 1990s. Bringing together scholars from law, political science and philosophy, this collection explores the character of contemporary populisms and their relationships to constitutional democracy. With contributors from around the world, it offers a diverse range of nuanced perspectives on populism as a global phenomenon. Using comparative and multi-disciplinary techniques, this book considers the specifics and similarities of populisms, and raises general questions about their nature and potential futures.

‘Populism is a reminder that constitutions are too important to be left to the lawyers and too powerful to be left to the politicians. This collection of essays revisits the basic paradox of constitutions as both power limitation and expansion to discuss ideological, political, juridical, argumentative and other challenges of populism to the democratic constitutionalism. It represents a major contribution to the plethora of populism literature because of its original focus on populism's parallel constitutional and anti-constitutional power, its variety, diversity and global contextualisation beyond common intellectual clichés and academic stereotypes.'

Jiří Přibáň - Director of the Centre of Law and Society, School of Law and Politics, Cardiff University

‘We live in an age of populism – but also populism that takes many different forms. In this important new collection, the authors explore different varieties of populism and their relationship to foundational commitments to democracy and constitutionalism. Drawing on experts and experiences from around the world, and especially Eastern Europe, the volume provides a clear-sighted view of the current origins, dangers and potential responses to anti-constitutional populism. It should be considered essential reading for anyone working in the fields of comparative constitutional politics and law.'

‘Populism is a metastasizing concept, shifting forms and sites in unpredictable ways. Combining diagnosis, prescription and critique, this volume provides myriad angles to understand the central political phenomenon of our time.'

‘This impressive collection of essays shows how populists reinterpret, erode and pervert national constitutions that guard citizens' rights. In the name of the ‘real people', the rights of court judges, trade unionists, ecologists, feminists and LGBT+ activists are being curtailed. Essential reading if you want to understand how populists operate in such diverse states as the Philippines, Brazil, Venezuela, South Africa, Hungary and Poland.'

Jan Zielonka - Professor of Politics at the University of Oxford, and author of Counter-Revolution: Liberal Europe in Retreat

‘We know much about how populist leaders talk, but we still know too little about what they do when in power. This excellent volume offers careful case studies, framed by sophisticated conceptual considerations, of how populists act against constitutions and courts – but also of how they on occasion use them for their purposes.'