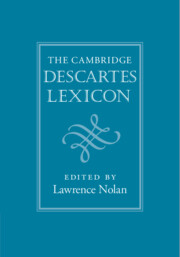 The words automaton and automate occur infrequently in Descartes’ works. But the occasions on which they occur are noteworthy. In the concluding paragraph of the Treatise on Man, he says that the functions of animals follow from the disposition of their organs, like those of a “clock, or other automaton” (AT XI 202, CSM I 108). In the Meditations, the meditator wonders whether beneath the cloaks and gowns he sees outside his window there are humans or automata (AT VII 32, CSM II 21). Most memorably, in the Discourse Descartes explains how an automaton with a soul may be distinguished from one without (AT VI 55–56, CSM I 139–40).

Automaton and machine, though allied, are distinct concepts. A Cartesian machine is a collection of bodies whose operations can be explained on mechanical principles alone: its parts are just parts of extension, and their motions are entirely subordinated to the laws of nature. (Human machines are built to serve human ends, including the “banausic” end of entertainment, sometimes by imitation; the machines of the Treatise on Man are said to be designed by God to imitate our figure and motions as do the figures and motions of the statues in the gardens of Saint-Germain, noted by Descartes in the Treatise.)

An automaton, on the other hand, is a self-mover, the proximate cause of certain of its own changes. The classical automata of antiquity were self-movers but not in every case machines. Aristotelians hold that animals are automata: self-movement distinguishes living things among natural things. For Descartes, the issue is not whether animals are self-movers, but how to accommodate that fact in a mechanistic physiology. He can be seen to have divided the problem into two: (1) the self-movement of the animal during its lifetime, which includes nutrition and growth as well as locomotion; (2) the special self-movement at the beginning of an individual's life, which consists in the self-assembly of its parts. Descartes addressed the first problem in the Treatise on Man; the second he considered at greatest length in the Description of the Human Body.