from Part II - The Written Word in Early Medieval Europe: The View from the Manuscripts 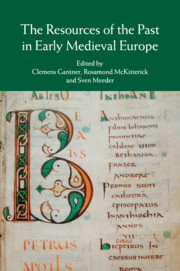 from Part II - The Biblical Past