from Part I - Simonides and the Poets of the Past

from Part I - Simonides and the Poets of the Past 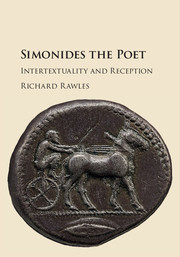