from Part I - Philosophy of Spirit and Hegel’s Philosophical System

from Part II - Hegel and Before 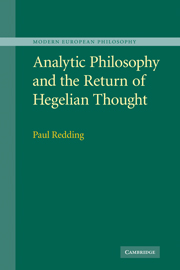