from THE FREE MARKET APPROACH

from 2 - Families in Latin America 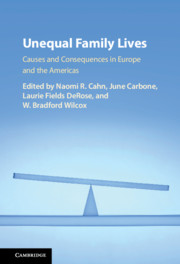 from Part V - Religious Claims at the End of Life