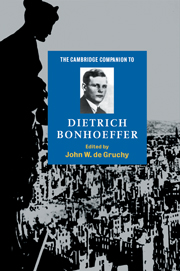 from Part one - Bonhoeffer's Life and Legacy