from 5 - Public Trust in the Indian Judiciary

from 5 - Public Trust in the Indian Judiciary 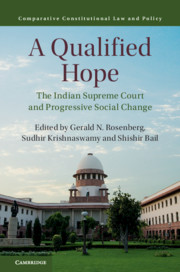