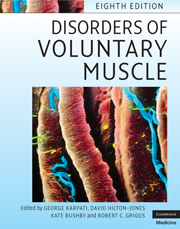 from Section 3A - Description of muscle disease – general aspects

from Section 3B - Description of muscle disease – specific diseases