from Part I - The General Will Before Rousseau

from Part III - The General Will in Rousseau 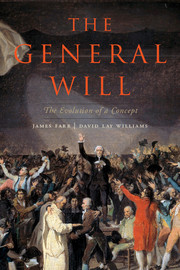