A Reviews journal of biological function, structure and mechanism 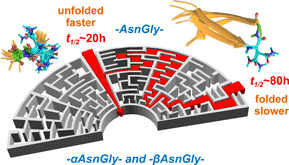 At any –Asn/AspGly– sites in proteins a spontaneous backbone isomerization occurs within days under physiological conditions leading to various forms of proteopathy. This unwanted transformation especially harmful to long-lived proteins (e.g. hemoglobin and crystallins), can be slowed down, though never stopped, by a rigid three-dimensional protein fold, if it can delay in the conformational maze, on-pathway intermediates from occurring.