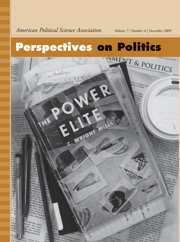 Review Symposium: Measuring the Quality of Life in the U.S.: Political Reflections

Review Symposium: The Politics of the Death Penalty