Theory and Applications of Models of Computation (TAMC 2008–2009) 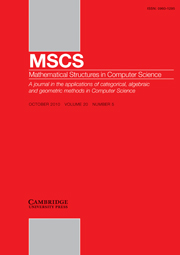