Law, Politics, and the Reasonableness of Faith 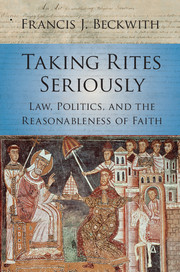 Taking Rites Seriously is about how religious beliefs and religious believers are assessed by judges and legal scholars and are sometimes mischaracterized and misunderstood by those who are critical of the influence of religion in politics or in the formation of law. Covering three general topics - reason and motive, dignity and personhood, nature and sex - philosopher and legal theorist Francis J. Beckwith carefully addresses several contentious legal and cultural questions over which religious and non-religious citizens often disagree: the rationality of religious belief, religiously motivated legislation, human dignity in bioethics, abortion and embryonic stem cell research, reproductive rights and religious liberty, evolutionary theory, and the nature of marriage. In the process, he responds to some well-known critics of public faith - including Brian Leiter, Steven Pinker, Suzanna Sherry, Ronald Dworkin, John Rawls, and Richard Dawkins - as well as to some religiously conservative critics of secularism, such as the advocates for intelligent design.

'Beckwith’s legal perspective and clarity make this short survey of the role of religious reasoning in American jurisprudence a valuable contribution to the defense of religion’s place in public life.'

'In Taking Rites Seriously, Francis Beckwith clears away many of the misunderstandings of religion that have marred discussions of faith and public life and corrupted the constitutional law of church and state. Of course, there are some academics and activists who are so deeply in the grip of secularist ideology that they have no desire to learn. Most Americans, however, whether they are believers or secularists, would like to be better informed about religion. For them, this book is a gift.'

'Sophisticated, learned, and committed, Francis Beckwith argues coolly for a reasoned faith even as he smites the Philistines hip and thigh on behalf of human life and dignity.'

'… graduate students, take note, it is also a major jump-start on about twenty-five doctoral dissertations. ‘Religious free exercise is part of the secular Constitution,’ says Beckwith, and that serves as a working summary of Beckwith’s main purpose in this important book.'

'Covering three general topics - reason and motive, dignity and personhood, nature and sex - Beckwith addresses a variety of legal and cultural questions over which religious and nonreligious citizens often disagree, including religiously motivated legislation, abortion and embryonic stem cell research, reproductive rights and religious liberty, and the nature of marriage.'

'We endorse Beckwith’s book because its goal is to encourage this kind of public reasoning about the ethico-religious matters that are hotly debated today across this society and within the field of religious studies.'

Peter Ochs and Randi Rashkover Source: Journal of the American Academy of Religion