The Politics of International Legitimacy 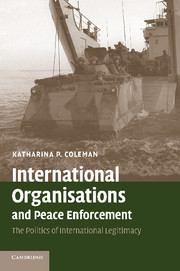 'In terms of its organization, sophistication and use of detail to illuminate a big and important question, this book is a model of how it should be done. It provides a comprehensive and compelling answer to the question it addresses … an important contribution to our understanding of peace enforcement and the relationship between states and international organizations more generally.'