The State of the Art 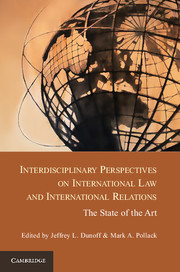 'Interdisciplinary Perspectives on International Law and International Relations is an impressive volume that brings together the leading writers in the fields of international law and international relations to celebrate this development, while also critically assessing the conceptual and empirical contributions of IL/IR to the understanding of international law … Professors Jeffrey Dunoff and Mark Pollack’s anthology proves to be a tremendously valuable contribution to the study of international relations - one that traces the trajectory of IL/IR as a discipline over the past century, provides a comprehensive depiction and analysis of the field as it exists today through the varied analyses of the volume’s authors, and proposes a way forward for the continued development of cross-disciplinary IL/IR scholarship.'

'Magisterial … The strength of this edited book is the sheer breadth of the coverage and the diversity of the authors … A work like Interdisciplinary Perspectives on International Law and International Relations offers a valuable opportunity to take stock of what has been learned.'