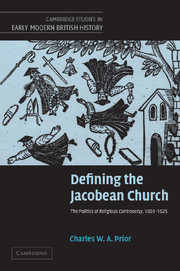 This 2005 book proposes a model for understanding religious debates in the Churches of England and Scotland between 1603 and 1625. Setting aside 'narrow' analyses of conflict over predestination, its theme is ecclesiology - the nature of the Church, its rites and governance, and its relationship to the early Stuart political world. Drawing on a substantial number of polemical works, from sermons to books of several hundred pages, it argues that rival interpretations of scripture, pagan, and civil history and the sources central to the Christian historical tradition lay at the heart of disputes between proponents of contrasting ecclesiological visions. Some saw the Church as a blend of spiritual and political elements - a state Church - while others insisted that the life of the spirit should be free from civil authority.

Review of the hardback:'The not unreasonable claim made by this book is that we should try to interpret and decipher the ecclesiological dynamics of the Jacobean Church by distancing ourselves, as far as we can, from narrow theological concerns.'

Source: The Journal of Ecclesiastical History