State Power, Islam, and the Quest for Pakistan in Late Colonial North India 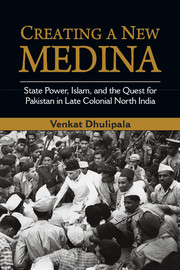 This book examines how the idea of Pakistan was articulated and debated in the public sphere and how popular enthusiasm was generated for its successful achievement, especially in the crucial province of UP (now Uttar Pradesh) in the last decade of British colonial rule in India. It argues that Pakistan was not a simply a vague idea that serendipitously emerged as a nation-state, but was popularly imagined as a sovereign Islamic State, a new Medina, as some called it. In this regard, it was envisaged as the harbinger of Islam's renewal and rise in the twentieth century, the new leader and protector of the global community of Muslims, and a worthy successor to the defunct Turkish Caliphate. The book also specifically foregrounds the critical role played by Deobandi ulama in articulating this imagined national community with an awareness of Pakistan's global historical significance.

‘Dhulipala's impressively researched, lucidly written, and intelligently argued book comes as a sharp but welcome corrective to the tendency to see Pakistan as a country created accidentally in a fit of popular enthusiasm and elite indirection in the final, confusing years of British rule in India. Dhulipala shows, with particular focus on north India, how rich the 1940s were with public debates in English and Urdu over the meaning of Pakistan. This is an exciting, significant, and challenging contribution to South Asian history.'

‘This is a path-breaking book, indispensable to anyone who wishes to understand the emergence of Pakistan. It persuasively challenges dominant understandings of Pakistan as the creation of a ‘sole spokesman' or of ‘secular elites' and demonstrates a long-standing relationship between the Muslim League leadership and an important set of Deobandi ulama. It shows how preparations for creating an Islamic state in Pakistan began in the early 1940s, and explores the conflation in people's minds between the creation of Pakistan and the fashioning of a ‘New Medina'. It thus brings Islam back into the debate on Pakistan's birth and offers a new perspective for its subsequent development. It should be read not just by specialists working on India's Partition and modern Pakistan, but by scholars in Middle Eastern history and politics and those interested in twentieth-century Islamic movements.'

‘Dhulipala's monograph breaks new ground in studies of the birth of the Pakistan idea in northern India. In place of the conventional focus on political negotiations and communal violence, he explores its cultural and religious dimensions and traces the roots of the concept in Indian as well as in early Islamic traditions. Based on meticulous research into a massive corpus of Urdu journals and religious treatises, it looks at the role of the Deoband clergy in very new ways. It is a valuable and important addition to the historical field.'

‘Dhulipala's magisterial book is one of the first to carefully examine a broad range of debates on the idea of Pakistan both in English and in Urdu that illuminated the public sphere in the decade before Partition, particularly within the context of politics in UP. His book powerfully illustrates that understandings of Pakistan were not so vague or ill-formed as many historians have previously argued. Supporters (and opponents) of Pakistan were deeply engaged both with contemporary ideas about the modern nation-state and with conceptions of the state rooted in Islamic history. This is a significant story for understanding Pakistan's intellectual and political heritage.'

‘I read Creating a New Medina not as a slice of Indian history but as a brilliant, elegantly written study of some of the crucial subjectivities that led to the partitioning of British India. Refusing to wear glasses well-meaning liberal historians often love to wear, Dhulipala takes a hard look at styles of mobilisation deployed by the Pakistan movement and explores how they radically changed the nature of politics in mid-twentieth-century British India - to ultimately shape the future of public life in postcolonial South Asia.'

'… arguably among the most important studies of the ideological origins of Pakistan published to date … A magnificent book.'

'Dhulipala has raised a host of uncomfortable issues that politicians and intellectuals on both sides of the Radcliffe Line would prefer to shy away from.'

'Venkat Dhulipala’s book … is a treasure house of information about debates and discussions relating to the idea of Pakistan.'

'… [an] engaging book … a small treasure of references about how the campaign for Pakistan was being conducted in the areas of North India.'

'[In] Creating a New Medina, Venkat Dhulipala makes well-researched and insightful comments on the emergence and popularity of the demand for Pakistan in the final decade of colonial rule in India.'

'… an encyclopedic masterpiece … This wonderfully written and painstakingly researched book will be of tremendous interest to students and scholars of Muslim politics, nationalism and religion, and South Asian Islam.'

'This is an important book … Venkat Dhulipala has provided much food for thought and unearthed a host of sources that demonstrate, without doubt, that Pakistan was not 'insufficiently imagined'. On the contrary, it was abundantly imagined, both vehemently opposed and extravagantly supported, with many shades of opinion in between.'

'Dhulipala’s work, scholarly but accessible, upends decades of accumulated conventional wisdom in both India and Pakistan. Indians can no longer pretend that Pakistan was a fraud committed by a handful of Muslim grandees. Pakistanis can never again argue that their country was intended to be anything other than an Islamic state. Today’s Pakistan, with its ascendant mullahs, is not an aberration from, but the culmination of, its ideological origins. Creating a New Medina is a masterpiece - arguably the most important work of history published in 2015.'

'By unearthing enormous evidence of overwhelming support for Pakistan especially in the United Provinces of Agra and Audh (U.P.) this book debunks the mainstream historiography of Pakistan as a sudden emotive construct. … Taking the same tradition of iconic writings forward, this encyclopaedic work makes a valuable addition to the ever-expanding literature on Pakistan.'