The Untold Story of Refugee Entrepreneurs 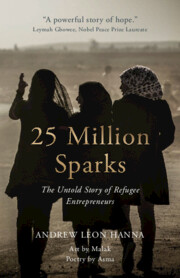 25 Million Sparks takes readers inside the Za'atari refugee camp to follow the stories of three courageous Syrian women entrepreneurs: Yasmina, a wedding shop and salon owner creating moments of celebration; Malak, a young artist infusing color and beauty throughout the camp; and Asma, a social entrepreneur leading a storytelling initiative to enrich children's lives. Anchored by these three inspiring stories, as well as accompanying artwork and poetry by Malak and Asma, the narrative expands beyond Za'atari to explore the broader refugee entrepreneurship phenomenon in more than twenty camps and cities across the globe. What emerges is a tale of power, determination, and dignity – of igniting the brightest sparks of joy, even when the rest of the world sees only the darkness. A significant portion of the proceeds from this book are being contributed to support refugee entrepreneurs and general refugee causes in Za'atari and around the world.

'25 Million Sparks is a powerful story of hope - a beautiful reminder of our equal dignity, common humanity, and brilliant potential for innovation. It sheds light on the brutal injustices of war and violence - while celebrating refugees’ records of uplifting communities, generating transformative ideas, and creating peace even amid disaster. Hanna’s captivating human-centered narration of the stories of three women entrepreneurs in the Za’atari camp allows their voices to be heard clearly. These stories, along with others across the globe, are illustrative of the resilience and the power of refugees - and particularly of refugee women - to heal, lead, and advance communities around the world … if only the world recognizes, listens to, and invests in them appropriately.'

'Andrew Leon Hanna takes us inside the inhumanity of this, the largest Syrian refugee camp, to discover humanity at its best: Asma, Malak, and Yasmina, determined to make the most of their talents. More than faces in a massive crowd, they give us a reason to believe in them and the countless others displaced by war.'

Judy Woodruff - Anchor and Managing Editor of the PBS NewsHour

'25 Million Sparks evokes hope and inspiration from the most disquieting state of the human condition. Hanna’s beautifully and masterfully interwoven narrative unveils the lives of three Syrian women surviving as refugees in the Za’atari camp in Jordan. Hanna’s spotlight on their entrepreneurship chronicles the resilience of the human spirit against the inhumanity of war. As a two-time refugee, I am intimately familiar with the tragedy of conflict, the desperation of loss, and the curative effect of self-reinvention. 25 Million Sparks is a testament to the power of hope and the power of women.'

Heather Ibrahim-Leathers - Founder of the Global Fund for Widows

'Hanna tells the inspiring stories of three Syrian refugees, whose creativity and entrepreneurship show the strength of the human spirit to turn even the most difficult adversity into opportunity.'

'Against the backdrop of the global refugee crisis, 25 Million Sparks beautifully tells the moving story of three Syrian women working as entrepreneurs in a refugee camp in Jordan. The story of these remarkable women shines through the pages, with their devotion to building a better life for themselves and their families. And it calls us to action to address the disparate needs of more than 25 million refugees.'

'Readers will gain a new appreciation of a community that’s, as Hanna writes, 'turning unimaginable pain into beautiful reinvention.'