How Do We Know? The Social Dimension of Knowledge 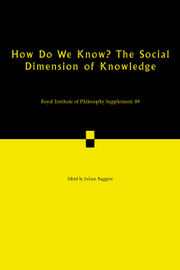