Latest issue of The Journal of Modern African Studies 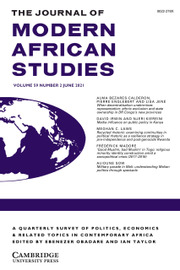