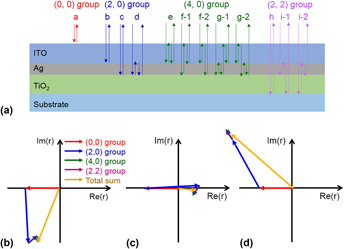 We report on the formation of highly flexible and transparent TiO2/Ag/ITO multilayer films deposited on polyethylene terephthalate substrates. The optical and electrical properties of the multilayer films were investigated as a function of oxide thickness. The transmission window gradually shifted toward lower energies with increasing oxide thickness. The TiO2 (40 nm)/Ag (18 nm)/ITO (40 nm) films gave the transmittance of 93.1% at 560 nm. The relationship between transmittance and oxide thickness was simulated using the scattering matrix method to understand high transmittance. As the oxide thickness increased from 20 to 50 nm, the carrier concentration gradually decreased from 1.08 × 1022 to 6.66 × 1021 cm−3, while the sheet resistance varied from 5.8 to 6.1 Ω/sq. Haacke's figure of merit reached a maximum at 40 nm and then decreased with increasing oxide thickness. The change in resistance for the 60 nm-thick ITO single film rapidly increased with increasing bending cycles, while that of the TiO2/Ag/ITO (40 nm/18 nm/40 nm) film remained virtually unchanged during the bending test.