Sasanian Iran and Beyond: A Special Volume in Honour of Michael G. Morony and His Contributions to Late Antique History 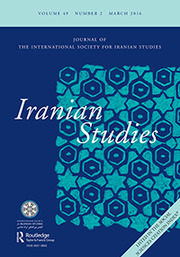