Precursors and Diverse Pathways to Personality Disorder in Children and Adolescents: Part 2 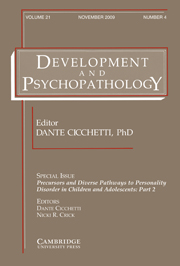