Nutrimenthe Project: Effect of Diet on the Mental Performance of Children 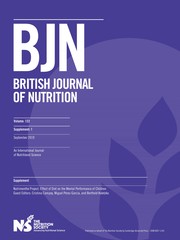