Managing the Challenges of WTO Participation 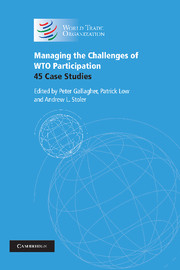 This 2005 compilation of 45 case studies documents disparate experiences among economies in addressing the challenges of participating in the WTO. It demonstrates that success or failure is strongly influenced by how governments and private sector stakeholders organise themselves at home. The contributors, mainly from developing countries, give examples of participation with lessons for others. They show that when the system is accessed and employed effectively, it can serve the interests of poor and rich countries alike. However, a failure to communicate among interested parties at home often contributes to negative outcomes on the international front. Above all, these case studies demonstrate that the WTO creates a framework within which sovereign decision-making can unleash important opportunities or undermine the potential benefits flowing from a rules-based international environment that promotes open trade.

'One of the most important aspects of the functioning of such a complex system as the multilateral trade, is to understand how countries deal with difficult policy choices. the case studies presented in this book constitute a unique and very useful contribution to this problem.'

'This book is a refreshing antidote to many of the popular myths and misconceptions about the WTO. Its wealth of case studies shows how membership creates opportunities and rights, as well as obligations, and that what individual countries make of them is the key determinant of their success in harnessing the benefits of trade'.

'As far as I know, these case studies are unique in WTO-related literature and give us a real insight into how different governments formulate their policies in respect of the WTO.'

'This book is the first of its kind and makes an invaluable contribution to understanding the workings of the WTO. These case studies show that what happens in Geneva is very often the result of a complex process that takes place in national capitals.'

'In this book you are very capably guided through the game that is international trade and shown the human face of the WTO. … In the right hands, good facts, sound research, and clever ideas can be powerful instruments of policy change and reform. This book has the potential to be just that.

'Most of the studies are by researchers from the countries concerned, some of them, particularly in the Latin American cases, excellent … Four chapters are on the process of negotiating services in the Uruguay Round or telecoms more recently. These not only demonstrate the importance of national agendas in determining countries' commitments in an area where there were few demands, but are also illuminating on how coalitions and negotiating positions are formed in a new area …'

'The book is recommended reading for the business and lobbyist community, affected by WTO decisions as well as for government and non-governmental organisation officials, involved in effective international trade policy design, conduct of negotiations or implementation. Interviews with the actual economic and political actors form an essential part of the case studies. … The book helps to rule out some of the misconceptions against the WTO as an institution, which, judging from the experiences in the book, turns out to be much less influential than most observers tend to believe.'

'The book should be compulsory reading for economists, policy makers and technocrats in developing countries.'