from Part III - Observing through the atmosphere

from Part IV - From detected photons to the celestial sphere 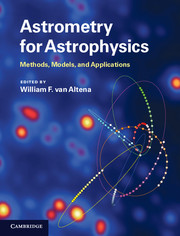