from RIGHTS AND SOCIETY

from PART A - Minorities-specific instruments, provisions and institutions 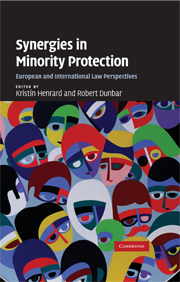