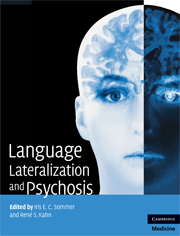 from Section 2 - Language lateralization and psychosis