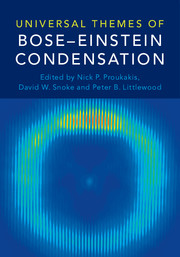 from Part V - Condensates in Astrophysics and Cosmology