from Part IV - Syntactic processes: their nature, locality, and motivation 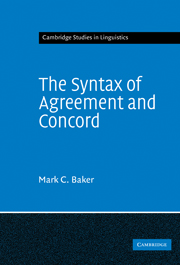