from Part III - Aristotle and the Aristotelian Tradition 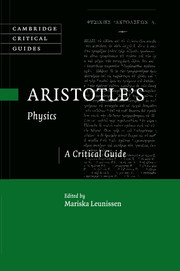 from Part III - Ethics and the natural sciences