from Part VI - CONSCIOUSNESS AND WAYS OF KNOWING

from Part I - Moving beyond speciesism 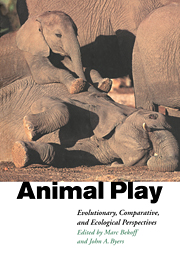