from Section 1 - The social, genetic and environmental aspects

from Section 2 - Hormonal and reproductive effects

from Section 5 - Psychotic disorders in women 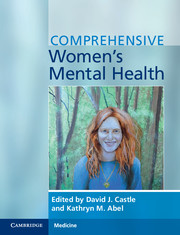