from Part I - Gods

from PART I - DEFINING THE GREEK TRADITION

from Part II - Mesopotamians and Iranians 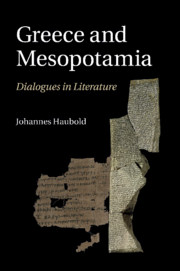