from Section 1 - The Practicalities of Returning to Work

from Part IV - The interface of religious law and civil law 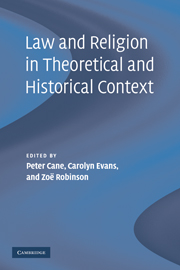