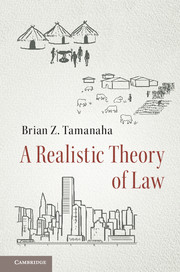 from Section II - PHILOSOPHY AND METHODS FOR A NEW LEGAL REALISM

from Part I - Origins and Contours