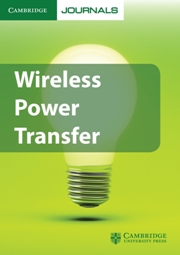 It is our pleasure to present this special issue of the Cambridge Journal of wireless power transmission (WPT) comprising scientific contributions mainly from groups joining the recently funded European research consortium COST IC1301 “Wireless Power Transmission for Sustainable Electronics (WiPE)”. This COST Action IC1301 aims to address efficient WPT circuits, systems, and strategies specially tailored for battery-less systems: namely energy-autonomous sensors, passive RFID, and near-field communications. All these systems implement closely related concepts that make use of WPT and energy harvesting systems to remotely power up mobile devices or to remotely charge batteries, contributing to develop and foster the Internet of Things evolution. Devoted to the main COST mission, that is to strengthen Europe's scientific and technical research capacity by supporting cooperation and interaction between European researchers, IC1301 WiPE regroups active researchers in the domain of WPT from Universities, Research Institutes, and Companies located in 25 European countries. The expected benefits of WiPE include the creation of a wide network of experts both from academia and industry who can address the existing and upcoming challenges in WPT scenarios in an interdisciplinary manner paving the way for the future generations of WPT solutions and the associated regulation.

In this framework we have taken the opportunity to foster publications related to the WiPE first-year activities in the present issue of the Journal. The papers present interesting novel solutions developed by the consortium member and collaborator research groups in the exploitation of the near- and far-field wireless power transfer techniques. Joint research results were possible thanks to the financial support of the COST organization in realizing Short Term Scientific Missions among the members of the WiPE COST Action. Contributions from outside of Europe have been considered and they were possible due to the relationships established during the COST action meetings, by inviting outstanding researchers in this field.

A total of nine papers were submitted to this special issue, and reviewers were selected from the WPT Cambridge Journal Editorial Board. The present issue contains four papers, while additional contributions will appear in the future issues of WPT Journal. We would like to thank the authors for their contribution. Furthermore, we would like to extend a special thank you to all the reviewers for their time and effort. Without their dedication, the review process would not have been successfully completed on time. Finally, we would like to express our sincere gratitude to this Journal' Editors-in-Chief, Dr., Apostolos Georgiadis for his tireless support.

System-level and component-level contributions are found in the present issue for advanced far-field solutions, that can be grouped according to the power levels involved: for medium- to high-power transfer, an advanced beamforming technique is experimented to exploit far-field microwave power transfer to a vehicle roof; in a second paper time- and frequency-division techniques are considered as possible system-level solution for managing aerospace wireless sensor networks. An innovative solution is numerically and experimentally demonstrated which augments the rectenna operations at low RF power by combining RF thermal energy harvesting. Finally antenna designs for RFID readers are presented.

Alessandra Costanzo is Associate Professor at the University of Bologna since 2001. Her research interests are very widely distributed in the field of nonlinear design of RF/microwave front-ends providing highly innovative solutions in ubiquitous energy autonomous micro-systems. She exploited systems based on microwave interference for precise and non-invasive structural monitoring; she implemented multi-band rectennas, specialized for wearable applications, exploiting RF harvesting from ambient. She has authored more than 150 scientific publications on peer reviewed international journals and conferences, and holds three international patents. She has been partner of several EU projects and founder member of the COST IC1301, where she chairs WG1: “far-field wireless power transfer”. She is IEEE Senior member.

Alexandru Takacs was born in Simleu Silvaniei, Romania in March 1975. He received his Engineer Diploma in Electronic Engineering from the Military Technical Academy, Bucharest, Romania in 1999, his Master (2000) and Ph.D. degrees (2004) in Microwave and Optical Communications from National Polytechnic Institute of Toulouse, France. From 2004 to 2007 Dr., Takacs was Lecturer at Military Technical Academy of Bucharest and Associate Researcher at Microtechnology Institute of Bucharest. He held a Postdoctoral position at CNRS-LAAS, Toulouse from 2008–2010. During 2011 he worked as R&D RF engineer at Continental Automotive SAS France charged with antenna design and automotive electromagnetic simulation. Since 2012, he has been an Associate Professor at the University of Toulouse. His research interests include: design of microwave and RF circuits, energy harvesting and wireless power transfer, MEMS circuits and systems, small antenna design, electromagnetic simulation techniques, and optimization methods. He has authored or co-authored one book, 1 book chapter, and 15 papers in refereed journals and over 70 communications in International Symposium Proceedings.

Nuno Borges Carvalho is a Full Professor and a Senior Research Scientist with the Institute of Telecommunications, University of Aveiro and an IEEE Fellow. He coauthored Intermodulation in Microwave and Wireless Circuits (Artech House, 2003), Microwave and Wireless Measurement Techniques (Cambridge University Press, 2013) and White Space Communication Technologies (Cambridge University Press, 2014). He has been a reviewer and author of over 200 papers in magazines and conferences. He is Associate Editor of the IEEE Transactions on Microwave Theory and Techniques, IEEE Microwave Magazine, and Cambridge Wireless Power Transfer Journal. He is the co-inventor of four patents. His main research interests include software-defined radio front-ends, wireless power transmission, nonlinear distortion analysis in microwave/wireless circuits and systems, and measurement of nonlinear phenomena. He has recently been involved in the design of dedicated radios and systems for newly emerging wireless technologies. He is the chair of the COST Action IC1301.